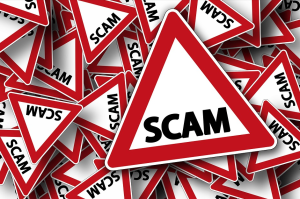 Symantec has blocked around 289 million extortion emails between January 1 and May 29, 2019. But scammers are still making around $1.2 million a year. Considering that very little effort and skill is required to send extortion emails, it’s a very profitable “business” for many low-level scammers.

Users who have received extortion scam emails will immediately know what kinds of scams we are talking about exactly. They are pretty distinct, and can cause quite a scare for some users. Extortion emails claim to have something on users, be it a sex tape, evidence of uploading child pornography, a video of them watching adult videos, etc. One slightly different email claims that a bomb has been planted where the user works. However, these extortion emails are highly generic and pretty obvious if one knows what to look out for.

In order to make the scam more convincing, such emails often include old passwords and phone numbers. Seeing one of the two in an email is bound to catch users’ attention, as it appears that the sender has access to private information. However, the reality is that the information is obtained from data dumps.

Some are more common than others, but there are numerous different types of extortion emails. It goes without saying that these emails are a scam. Users who receive such emails can safely mark them as spam or simply delete them.

These are the most popular extortion emails:

This is perhaps the most popular type of extortion email, and one users likely fall for the most. Users get an email with their old passwords or partial phone numbers in the subject line (or in the first sentence of the email), and are threatened with a video of them visiting adult websites. Supposedly, the scammer set up malware on adult websites, and when someone visits them, their computers become infected with malware that records via web cam as users watch adult videos. The scammer then claims that they had made a compilation of the adult video and the video the user is watching, and threaten to send it to all contacts unless the user is willing to pay. The highest sum requested we have seen is $4000, but it usually requests a couple of hundred dollars. 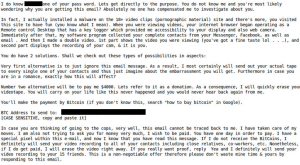 These bomb threat emails caused quite a commotion when they first started appearing. Such emails claim that a bomb has been placed in the building and it will go off unless the victim is willing to pay money, usually around $20,000. The emails are written in poor English and certainly do not seem legitimate. However, because bomb threats are always taken seriously, law enforcement agencies were involved and responded to many calls.

This is perhaps the most ridiculous extortion email. The senders claims to own a dark web website that offers criminal services. Supposedly, a hit has been ordered on the receiver of the email, but it can be canceled if the user is willing to pay money (usually a couple of thousand dollars). The sender is apparently quite “generous” and will not only cancel the hit, but will also give information on the person who ordered it if the money is paid.

This a more recent extortion scam. Scammers pretend to be law enforcement and claim that child pornography was uploaded from the user’s computer. The sender is supposedly some kind of detective nearing retirement, and he has decided to make some money. He promises to make all the evidence of child pornography go away if the user is willing to pay. If the user refuses to send the money, all evidence will be sent along and the user may be charged with a crime.

It’s understandable that this would unsettle many users, but a closer look at the contents of the email make it very obvious that it’s a scam. Bear in mind that these scammers claim to be from US law enforcement agencies, but the email is written in such poor English that sentences can be difficult to understand.

Lastly, the sender of this type of scam email claims to be someone the user has had an intimate relationship with in the past. Supposedly, a sex tape has been made and it will be sent to all of the user’s contacts unless money is paid. The sender uses quite threatening language to intimidate the user into paying. The sender of the email does not reveal their identity, making it difficult for the victim to know whether this is possible.