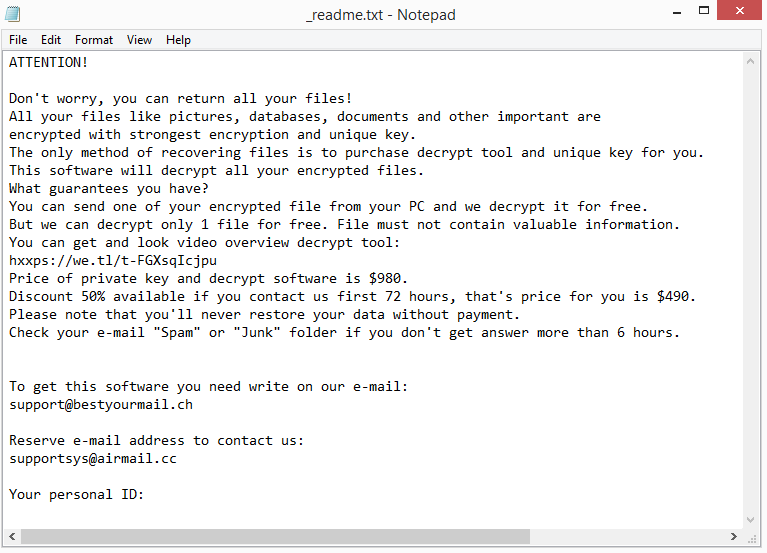 The Djvu/STOP ransomware family has hundreds of ransomware variants, albeit they are largely identical. Because it appends .jjll to the files it encrypts, this version is known as Jjll ransomware. The ransomware targets a variety of personal files, including photos, videos, images, documents, and many other file types.  For example, image.jpg would become image.jpg.jjll once encrypted. The files will not be openable unless you first use a decryptor on them. However, getting the decryptor is not easy because the only people who currently have it are the cybercriminals operating this malware.

When the ransomware has finished encrypting your data, it will drop a _readme.txt ransom note. The note explains how you can get the decryptor. Unfortunately, cybercriminals demand $980 for it. The note does suggest a 50% discount for those who get in touch within the first 72 hours, but it’s doubtful whether that’s actually true. In general, it is not recommended to give in to the cybercriminals’ demands or pay the ransom. Even if you paid, there are no guarantees that you would receive the decryptor. You are dealing with cybercriminals, and since they have no legal obligation to do so, they might just not send you the decryptor.

Without a backup, there is no certainty that files can be recovered. The only thing you can do is wait until a free Jjll ransomware decryptor is released. But because this ransomware uses online keys to encrypt files, developing a free decryptor will be quite challenging for malware researchers. Online encrypted keys mean all victims have unique keys, and those keys are necessary to decrypt files. However, it’s not impossible that those keys will be released at some point by the cybercriminals themselves if they ever decide to close up shop. So back up your encrypted files and store them until a free Jjll ransomware decryptor is released.

Typically, ransomware that targets individual users spreads through email attachments, torrents, advertisements on dubious websites, etc. This explains why users who engage in risky behaviors online are significantly more likely to expose their computers to malware. Make the effort to improve your browsing habits and familiarize yourself with malware distribution techniques if you wish to avoid malware.

If you use torrents, you are probably already aware of the fact that torrents frequently contain ransomware. Because torrent sites are often not well moderated, malicious actors can post torrents containing malware. Users that download those torrents end up initiating malicious software onto their computers. Malware is frequently found in torrents for popular movies, TV shows, video games, and software. We strongly recommend you avoid downloading copyrighted content using torrents because you’re not only essentially stealing but also risking damage to your computer.

Emails with malicious attachments are likely to be sent to users whose email addresses have been leaked. Malicious actors buy leaked email addresses from various hacker forums and proceed to spam them with malware-carrying emails. As soon as a malicious file attachment is opened, the malware can initiate. But fortunately, malicious emails are usually very obvious. Oftentimes, malicious senders pose as representatives of reputable companies whose services users use. By implying that the files are important documents/receipts that must be reviewed, malicious actors coerce users into opening the attachments. However, these emails frequently contain grammar and spelling mistakes, which immediately give them away as potentially malicious. You won’t often see grammar/spelling mistakes, or at least they won’t be as obvious, in authentic emails because they would come across as unprofessional. However, malicious emails frequently have them for one reason or another. Furthermore, when a legitimate sender would have used your name to address you, malicious senders instead use generic terms like “User”, “Member”, “Customer”, etc. It’s also important to note that some malicious emails may be more sophisticated. Before opening any unsolicited email attachments, it is recommended to scan them with anti-malware software or VirusTotal.

We advise against attempting to manually remove Jjll ransomware since it is a very sophisticated malware infection. You might unintentionally harm your computer if you don’t know exactly what you’re doing. Furthermore, the ransomware might be able to recover if you miss certain components. Your backed-up files would also get encrypted if you were in the middle of retrieving your files from a backup when the ransomware recovered. To remove the Jjll ransomware from your computer, use reliable anti-malware software. You can safely connect to your backup to begin restoring files once the ransomware has been completely removed.