Efvc ransomware is a variant of the Djvu/STOP ransomware. It’s a form of malware that encrypts files and holds them captive until a ransom is paid. This ransomware appends the extension .efvc to encrypted files, allowing you to quickly identify which files have been affected. Unfortunately, unless you have a decryptor, you won’t be able to decrypt those files right now. If you have backup copies of your files, you can begin file recovery as soon as you delete Efvc ransomware from your computer completely. Waiting for a free Efvc ransomware decryptor may be the only option for users without a backup. 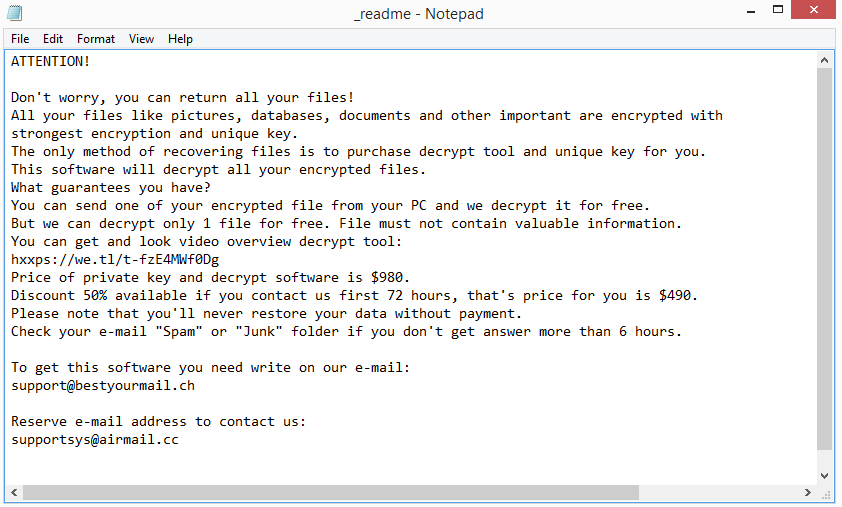 Once the ransomware has been activated, it will begin encrypting your personal files right away. All of your photos, videos, images, documents, and other personal information will be encrypted. Because they will have the .efvc extension appended to them, you will immediately know which files have been encrypted. An encrypted text.txt file, for example, would become text.txt.efvc. You won’t be able to open the files unless you run them through a decryptor. The ransom note _readme.txt explains how to obtain the decryptor. The cybercriminals are asking $980 for it. The note also claims that victims who contact the cyber criminals within the first 72 hours will receive a 50% discount, although we suspect that this is not true.

To remove Efvc ransomware from your computer, you must use anti-malware software. It’s a complicated malware infection that should only be removed with the help of a professional anti-virus program. Once the ransomware has been deleted, you can access your backup to start recovering files.

Users who do not have file copies saved in a backup will find it considerably more difficult, if not impossible, to recover files. There is currently no free Efvc ransomware decryptor available, but one may be released in the future. However, malware researchers will find it difficult to develop a free Efvc ransomware decryptor for this ransomware. The ransomware encrypts files with online keys, which are unique to each victim. A decryptor is unlikely at the moment unless those keys are released by the hackers themselves (or by law enforcement). It’s not impossible, though, that it will be released sometime in the future. So make a backup of your encrypted files and check NoMoreRansom for a decryptor on a regular basis.

Ransomware and other malware infections are spread through a variety of means. Torrents, email attachments, malicious advertisements, vulnerabilities, and so on are all examples of this. Because they participate in less risky behavior, users with healthy internet habits are considerably less likely to infect their machines with malware. If you have bad browsing habits, changing them will help you avoid a lot of infections in the future.

Malware is frequently delivered via email attachments, which is why opening random, unsolicited email files without double-checking them is very dangerous. For malicious actors, it’s a relatively low-effort means of distribution, which is why it’s so popular. However, in the majority of cases, the malicious emails are poorly written, making them easily identifiable. Grammar and spelling errors are the most obvious red flags. Malicious senders frequently impersonate genuine businesses, and their grammatical and spelling errors quickly reveal the deception. Because grammar/spelling mistakes in legitimate emails appear unprofessional, you will rarely encounter them in official emails. But malicious emails, for whatever reason, are frequently full of them. It’s possible that malicious actors aren’t native English speakers or simply don’t care enough to put forth the effort. The use of generic phrases to address you in emails sent by companies whose services you use is another clue that an email may be harmful. You will always be addressed by your name in emails sent by companies whose services you use. Malicious emails, on the other hand, address their potential victims with generic terms like User, Member, and Customer. They are forced to use generic language because they do not have access to personal information, such as a name. It’s worth noting that some malicious emails are more sophisticated than others, which is why we always advise scanning all unsolicited email attachments with anti-virus software or VirusTotal before opening them.

Malicious actors utilize torrents to spread malware as well. It’s not uncommon for torrent sites to be unregulated, allowing criminal actors to publish malware-infected torrents. Malware is frequently found in torrents for movies, TV shows, video games, and software. Torrenting is frequently a bad idea because of this, as well as the fact that downloading copyrighted content for free is inherently stealing.

If you do not have a backup, waiting for a free Efvc ransomware decryptor may be your only option. While not available at the moment, it could be released sometime in the future. Back up your encrypted files and check NoMoreRansom or another legitimate source for a decryptor from time to time.

Efvc ransomware is detected as: 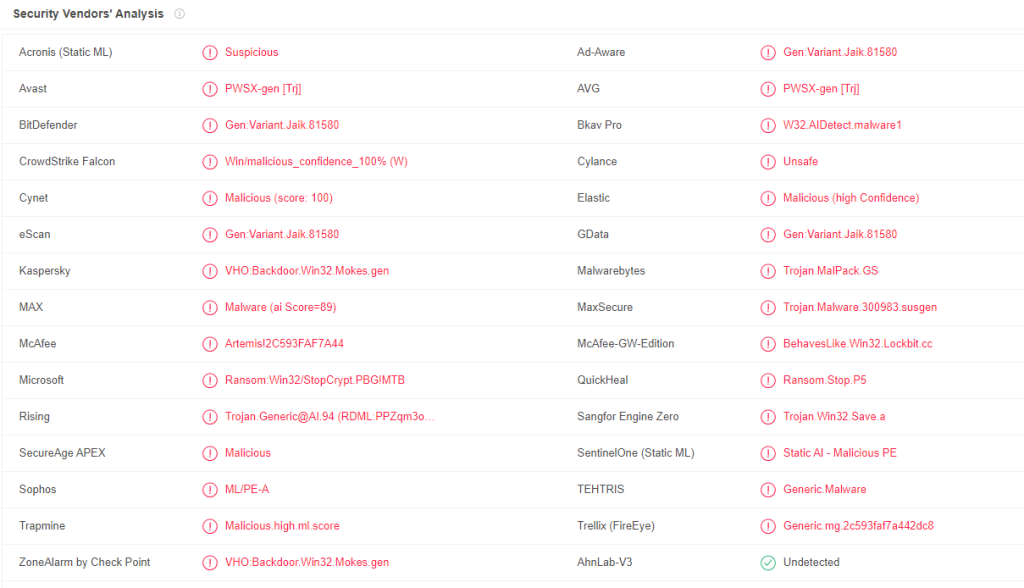