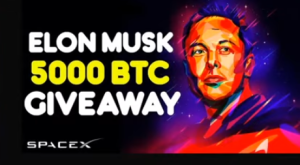 Aerospace company SpaceX and NASA recently successfully launched a crewed Dragon spacecraft to the International Space Station, the first time in almost 10 years that astronauts launched from American soil. The historic even brought a lot of attention to both founder Elon Musk and SpaceX. Scammers and cyber criminals were quick to take advantage of this.

It has been noticed that several YouTube channels have started impersonating NASA and SpaceX channels in order to push cryptocurrency giveaway scams. YouTube channels with substantial amounts of subscribers were hijacked and renamed to SpaceX Live, SpaceX or some other variation of the name. For example, a simple search of SpaceX live on YouTube displayed a channel SpaceX US with 149,000 subscribers promoting one of these cryptocurrency scams. The channel carried out a live stream of Elon Musk giving an interview for one of the SpaceX conferences. In addition to the interview, the video also displayed a Bitcoin giveaway scam. The video is set up as a live stream in order to give the impression that something is happening now, which would encourage users to participate. 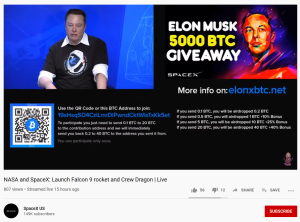 But this is not an isolated incident. These cryptocurrency giveaway scams are very common. Elon Musk in particular is frequently impersonated to push these scams. While these scams have been around for many years, there are still people who fall for them. And while these scams are taken down constantly, new ones take their place immediately.

How do bitcoin giveaway scams work?

If you’re not familiar with bitcoin (or any cryptocurrency) giveaway scams, they’re essentially a social-engineering attack in which scammers try to convince cryptocurrency investors into thinking that some celebrity (e.g. Elon Musk) or a cryptocurrency exchange (Coinbase) is hosting a giveaway. So far, it seems harmless enough. However, in order to enter these supposed giveaways, investors must send some amount of cryptocurrency to the provided address. Supposedly, people will receive double the amount they send. So if you send 1 bitcoin, you would allegedly receive 2 bitcoins. In some cases, scam giveaways asks users to send some amount of cryptocurrency in order to “verify the wallet address”, after which they would receive their share of the giveaway. Obviously, these are too-good-to-be-true type of situations, and users end up receiving nothing.

If some random person was pushing these scams, they would not gain any traction. However, by impersonating widely known people, scammers are able to attract a lot of attention, and thus trick many people. Elon Musk is often the victim of this. Scammers like to create Twitter accounts and make them strongly resemble Musk’s account. They set an identical profile picture, write the same account description, and even choose a similar Twitter handle. These fake accounts then comment on legitimate Musk tweets and promote the fake giveaways. Users who do not pay enough attention see the giveaway announcement but do not notice that the account is fake, and end up sending their cryptocurrency to scammers. Scammers have even hijacked verified Twitter accounts to make the scams seem more believable, as Musk’s account is verified and has the blue tick. The same goes for other celebrities and known companies such as Coinbase. 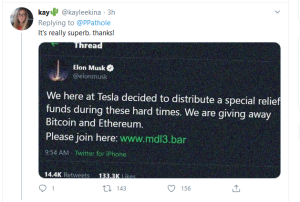 Twitter has been one the more popular platforms to push these scams but scammers have recently also started promoting them on YouTube. The SpaceX Crew Dragon Demo-2 launch on the 30 May 2020 was a great chance for scammers in particular because the entire event was live-streamed via NASA and SpaceX YouTube channels, and millions of people were searching for those channels in order to watch the launch. Scammers hijacked certain channels with hundreds of thousands of subscribers and renamed them so they would come up when users search for Crew Dragon launch. One of these scams generated around $150,000 in bitcoin before the scam channel was taken down.

For future reference, bitcoin or any other cryptocurrency giveaway you encounter will most likely be a scam. The golden rule is if it sounds too good to be true, it usually is. The scams are usually quite obvious as well, if users took a second to check their legitimacy, they would be able to easily determine what’s going on. And remember, you cannot reverse cryptocurrency transactions. If you participate in one of these scam cryptocurrency giveaways, there is no chance you will get your funds back.