amazonaws or Amazon Web Service (AWS), developed by Amazon, is a legitimate cloud platform that offers many different services. Amazon AWS is also often used by cyber scammers to host questionable websites which display malicious ads. Many users have complained that they are getting s3.amazonaws notifications and questionable ads that try to scam them. If users are constantly connecting to s3.amazonaws.com, it’s possible that an adware infection is involved. It’s likely that the adware installed on your computer is redirecting you to malicious sites hosted on Amazon AWS in order to generate revenue and expose you to scams. If you notice these frequent redirects, it’s strongly recommended to check for adware. While it’s not a serious computer infection and more annoying than anything, it can expose you to tech-support and other scams, and even malware. This is why it’s important that users delete amazonaws adware as soon as it is noticed.

Adware usually installs without users noticing, via software bundling. The method is often used by unwanted program developers because it allows their items to install without requiring users’ permissions. It will be explained in more detail in the following section of the report, but in short, it comes attached to free software as an additional offer. The offer is permitted to install, unless users manually stop them.

Malicious websites hosted on Amazon AWS often show users tech-support scams and encourage them to download questionable and even malicious software. Those ads are made to look like legitimate security alerts, which is why they’re so dangerous. Less tech-savvy users may fall for these scams and end up engaging with technical support scammers, who would try to trick users into giving up hundreds of dollars for non-existent services. Continue reading to find out how these scams work and why people fall for them.

Adware can be the culprit behind malicious amazonaws ads

When dealing with malicious ads and redirects to random websites, it’s often because of adware. Adware is a computer infection that users often install accidentally. A lot of programs available on those free download websites have something attached to them, usually adware, browser hijackers and potentially unwanted programs. The attached offers are hidden from users initially but are authorized to install alongside the freeware. These offers and their controversial installation methods are why it’s important that users pay close attention when installing programs. Otherwise, the computer fills up with junk programs that are difficult to remove. 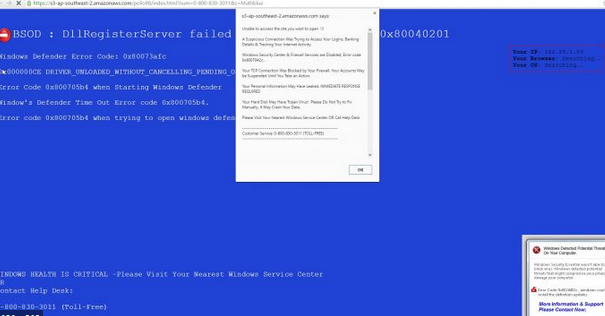 In the future, when installing free programs, you need to pay attention to the process. Most importantly, opt for Advanced (Custom) settings when given the option. Those settings, unlike Default, will make all offers visible and allow you to deselect everything. If any offers become visible when those settings are chosen, we recommend you deselect them. It’s unlikely that anything using software bundling will be of any use to you.

Choosing Advanced settings and unchecking a few boxes does not take much time or effort, especially compared to having to get rid of already installed infections like adware and browser hijackers.

Why could amazonaws ads be dangerous

Users have reported that when they get ads from s3.amazonaws.com, it’s often tech-support scams or ones promoting questionable software. It should be mentioned that your browser will never display legitimate malware notifications, Microsoft will never block your computer because of malware, and legitimate companies like Microsoft and Apple do not make unsolicited contact with their users, nor do they show ads with phone numbers. Only your anti-virus program should ever be trusted with detecting malware.

Tech-support scams are categorized as scams that falsely claim something is wrong with the computer and encourage users to call numbers for supposed tech-support. The ads are often made to seem like legitimate Windows alerts in order to confuse the user, and claim that malware has been detected on the computer, and that data is being stolen. The scams urge users to call the provided numbers in order to solve the issues. However, if users were to call, they would be dealing with professional scammers pretending to be legitimate Windows tech-support. The scammers would request remote access to the user’s computer in order to “fix” the issue. If granted, they would try to steal important files and documents, and even lock the user out of his/her own computer. During the whole session, scammers try to convince users that their computers have serious issues and that they’re fixing it. Oftentimes, users are asked to install supposed security programs as well. By the end of such sessions, users are asked to pay hundreds of dollars. 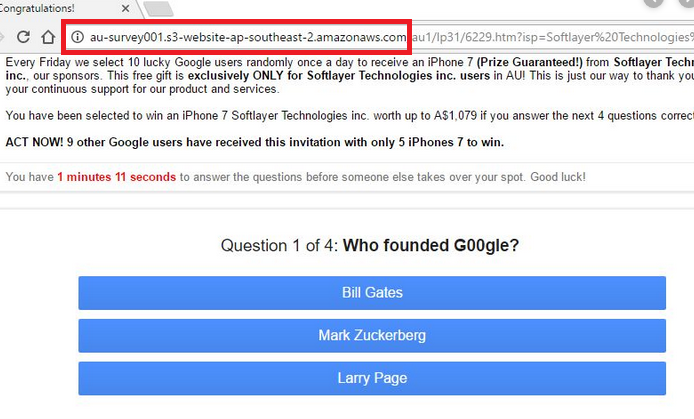 Similar scams ask users to install offered software. An ad would pop-up, claiming that malware is inhabiting users’ computer and is stealing information, and that downloading and installing the offered program would solve the issue. The offered program would turn out to be either malware or a potentially unwanted program that doesn’t do anything but asks users to buy its full version.

You may also encounter other ads hosted on amazonaws that could be dangerous. Users commonly encounter “You have won” ads that claim users have won expensive devices like iPhones or Samsung smartphones, but they’re scams as well. No legitimate company hosts giveaways like that, and these scams are merely attempts to get users’ personal information. If scammers acquire the data, they later use it to scam users further.

Being redirected to a amazonaws website once or twice may be nothing to worry about. However, if it’s constantly happening and you’re seeing ads promoting scams, we suggest checking your computer for adware. Doing it manually may be difficult, so it would be best to use anti-spyware software. The program would scan your computer and remove amazonaws adware if its present without you having to do anything. Manual amazonaws removal will not necessarily be successful because these infections are sneaky.