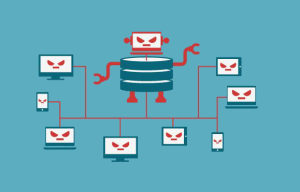 While there is a lot of different malware dedicated to creating a botnet, their principle of operation is roughly the same. Devices are initially infected via emails, internet links, security vulnerabilities in browsers or other programs. The infected system then contacts the Command and Control (C&C) server and receives a list of commands.

Botnet tasks may vary in some cases but they usually focus on stealing online banking credentials, logging keystrokes, sending spam, and DDoS attacks.

It’s difficult to say how many botnets there are and how big they are. A botnet could contain as little as a hundred of computers or as a many as a couple of million. It is believed that one in 600 computers is/has been part of a botnet.

Cyber criminals use computer zombie networks for various criminal purposes, and the main are:

This is not the complete list of ways botnets can be used, but it outlines the main purposes of botnet networks. Botnet networks are also used for political purposes, by executing attacks against individual states’ Internet infrastructure.