Lloo ransomware is a variant of the notorious Djvu/STOP ransomware. The ransomware will take your personal files hostage by encrypting them. You will know which files have been encrypted by the .lloo extension added to encrypted files. The extension also allows you to quickly identify which ransomware you’re dealing with. Unfortunately, you won’t be able to decrypt encrypted files at this time without a decryptor that only the malware operators have. Once you remove Lloo ransomware from your computer completely, you can begin the file recovery process if you have copies of your files in a backup. For users who do not have a backup, file recovery will not necessarily be possible. 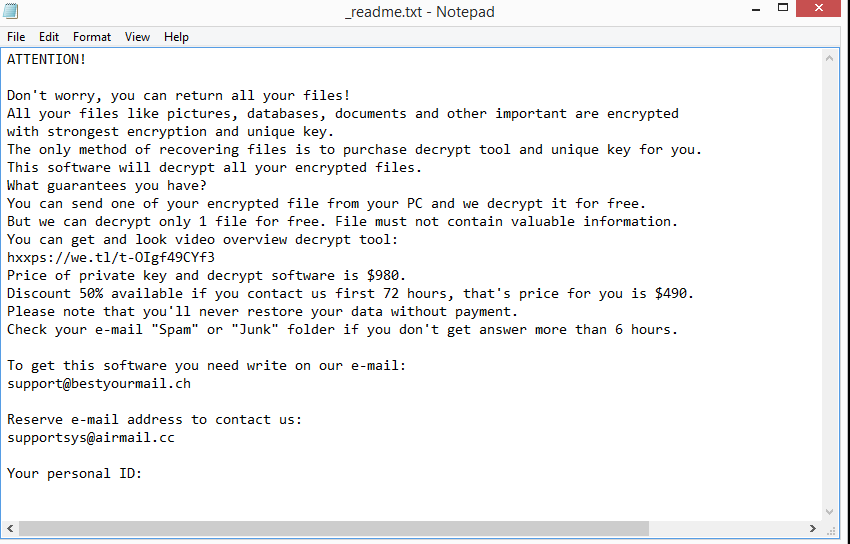 Your personal files will be encrypted the moment the ransomware is initiated. All of your personal files, including photos, images, videos, and documents will be encrypted. You can tell which files have been affected by the.lloo extension added to them. For instance, text.txt.lloo would be what an encrypted text.txt file would look like. If you don’t run the files through a special decryptor first, you won’t be able to open the encrypted files. The _readme.txt ransom note provides instructions on how to get the decryptor. Unfortunately, $980 is what the cybercriminals are demanding for it. The note also states that victims will receive a 50% discount if they get in touch with the cybercriminals within the first 72 hours. However, it’s unlikely to be true. And in any case, paying the ransom is very risky because you will not necessarily get the decryptor. Countless users have paid ransoms in the past only to not receive anything in return.

You need to use anti-malware software to remove Lloo ransomware from your computer. It’s a sophisticated malware infection that needs to be removed using a professional anti-virus program. Once the ransomware has been removed, you can start recovering your files from backup, if you have it.

There are many ways that ransomware and other malware infections are distributed. Most common methods include torrents, email attachments, malicious ads, vulnerabilities, and more. Users with good online habits are much less likely to infect their computers with malware since they engage in less risky activities. You can prevent a lot of infections in the future by changing your bad browsing habits.

Opening random, unsolicited email attachments without first examining them is extremely risky because malware is commonly distributed via email attachments. It’s a commonly-used distribution method because it requires relatively low effort for malicious actors. Fortunately, the majority of the time, malicious emails are written in a way that makes them obvious. The most obvious red flags are grammar and spelling mistakes. Malicious senders frequently pose as legitimate companies, but their grammar and spelling mistakes immediately expose the deception. You won’t often see grammar or spelling errors in official emails because they come off as unprofessional. However, malicious emails are usually full of them. Malicious actors might not be fluent English speakers or they might not care enough to make the effort. Another warning sign that an email may be malicious is when an email uses generic words like User, Member, Customer, etc. to address you instead of using your name. In emails sent by companies whose services you use, you will always be addressed by your name. On the other hand, malicious emails use generic phrases like User, Member, and Customer to refer to users. They are forced to use generic terms since they do not have access to personal information. It’s also worth mentioning that some malicious emails may be more sophisticated than others. We strongly recommend scanning all unsolicited email attachments with anti-virus software or VirusTotal before opening them.

Additionally, malicious actors use torrents to spread malware. Torrent sites are frequently poorly moderated, allowing cybercriminals to distribute files with malware. Torrents for software, video games, TV shows, and movies frequently contain malware. Due to this and the fact that downloading copyrighted content for free is theft by definition, torrenting is generally a bad idea.

Lloo ransomware is a very complex malware infection, which is why it’s not a good idea to try to remove Lloo ransomware manually. You could end up causing additional damage to your computer. If you miss some ransomware components, the ransomware may be able to recover. And if that were to happen while you were connected to your backup, the backed-up files would become encrypted as well. We strongly recommend using a professional anti-malware program to delete Lloo ransomware.

Lloo ransomware is detected as: