“Pirated Windows Software detected in this Computer” is a fake virus alert that you may be redirected to when browsing high-risk websites. It’s classified as a tech-support scam because it displays a phone number for fake Microsoft tech support. Forcing users to call the number is the main point of this scam. Users who call would be connected to professional scammers pretending to work for Microsoft. They would try to trick users into paying hundreds of dollars for services they do not need nor would actually get. 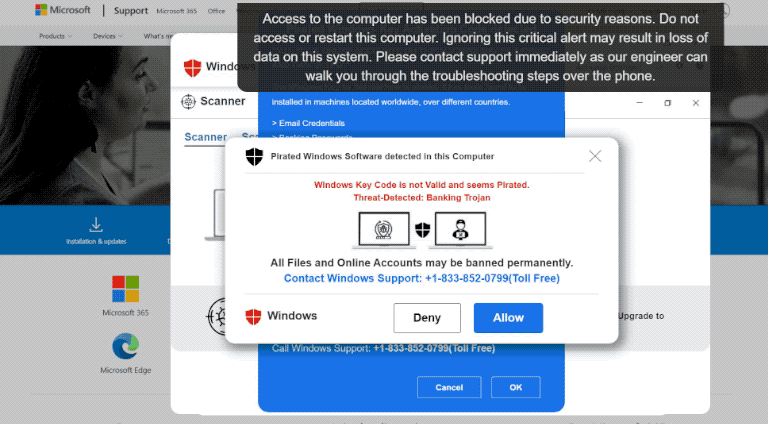 This tech-support scam starts off by claiming that “Access to the computer has been blocked due to security reasons”. Supposedly, because your Windows version is pirated, Microsoft has blocked your device. The alert also mentions that a banking trojan is present on your computer. It’s supposedly stealing your information and files. Users are usually redirected to these pop-ups when browsing certain high-risk websites, or because their computers are infected with adware. But in either case, you can ignore the pop-ups because they will always be fake. First of all, Microsoft does not block computers, even if users are using pirated Windows versions. Second, your browser will never display legitimate virus alerts because it’s not capable of detecting malware. And finally, legitimate alerts will never display phone numbers. You should only trust your anti-virus program to accurately detect malicious software on your computer.

The alert displays a phone number that users are supposed to call to fix the issue. If you were to actually call them, you would be connected to professional scammers pretending to be Microsoft technicians. They would explain the fake issue to you using nonsense technical terms and request remote access to your computer to supposedly fix the issue. If you agree to give them remote access to your device, they will pretend to fix the issue while stealing your files/data. Or in this particular case, they would try to convince you to buy a supposedly legitimate version of Windows from them.

Scammers can get quite aggressive when users do not cooperate. In this case, they may even threaten to report you to authorities for using pirated software. You shouldn’t take anything they say seriously, however. By the end of the supposed repair session, they will demand that you pay a couple of hundred dollars for the services you supposedly received. Paying would be a waste of money since scammers didn’t actually do anything useful. If you’re interested to see what these scams look like, you can find many videos on YouTube of professionals engaging with scammers for educational purposes. Software engineer Jim Browning has an entire YouTube channel dedicated to exposing these kinds of scams.

It’s also important to determine why you’re being redirected to these tech-support scams. If it happened once, it was likely triggered by the site you were visiting. Installing an adblocker is recommended, but other than that, you don’t really need to do anything.

Redirects to tech-support scams can be triggered by adware

It’s also possible that your computer has adware installed, and that’s what causes the redirects. If that was the case, the redirects would occur regularly, even when browsing high-risk websites.

Adware infections are usually installed via free software bundling. This method allows infections like adware and browser hijackers to install without explicit permission, which is why it’s so popular among unwanted program developers. What could have happened in your case is the adware could have been attached to a free program you installed, and you did not notice. When a program has offers attached to it, they’re permitted to install alongside automatically, without requiring explicit permission. They’re technically optional but users need to manually prevent them from installing. And because they’re hidden, users simply do not notice them.

To prevent unwanted installations in the future, install programs using Advanced (Custom) settings. Even if the installation window recommends using Default settings, use Advanced. Default settings will conceal all added offers and allow them to install alongside. But Advanced settings will not only make all offers visible but also give you the option to deselect everything. All you need to do is uncheck the boxes of those offers.

Some offers may seem useful at first sight but allowing them to install is not a good idea. Software bundling is a very controversial installation method because it allows programs to install without explicit permission. And keep in mind that it’s much easier to prevent unwanted installations than it is to get rid of adware once it’s fully installed.

You were likely redirected to this tech-support scam by a website you were browsing. Make sure to install a reliable adblocker program to block all of the intrusive ads, pop-ups, and redirects. You should also scan your computer with anti-virus software in case an adware infection is present. If it is adware, only removing it would stop the “Pirated Windows Software detected in this Computer” tech-support scam redirects.