If you refuse to pay $1370 in Bitcoin, this generic “Start The Conversation With Bad News” sextortion email campaign threatens to reveal a private video of you viewing pornography. These types of emails are classified as sextortion scams because they threaten to release users’ private videos. But the videos don’t actually exist and this is nothing more than a generic scam. There has been an increase in these scams in recent years, and they’re all more or less identical to one another. If the “Start The Conversation With Bad News” email scam lands in your inbox, you can ignore or delete it. There is no malware on your computer, nor do malicious actors have a private video of you watching pornography. 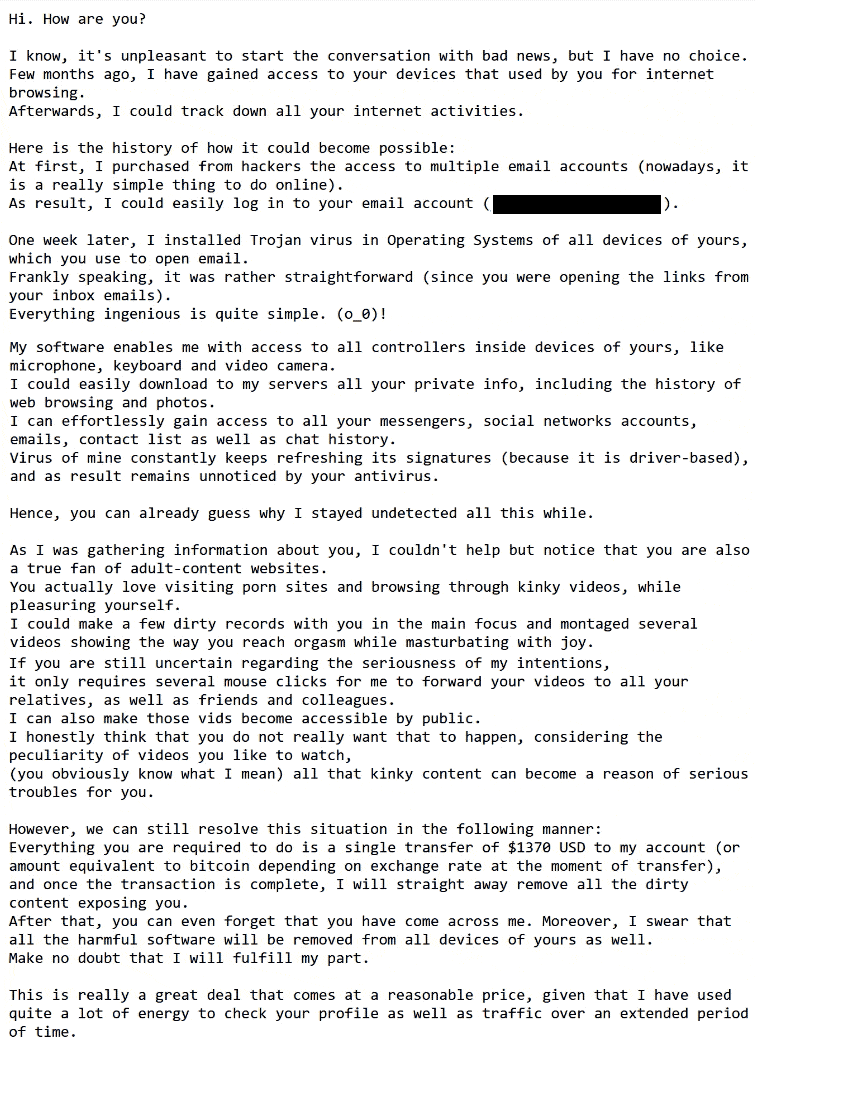 Sextortion scam emails have become more prevalent in recent years, and new campaigns are constantly being discovered. Despite the fact that they are presumably all run by different malicious actors, they all operate according to the same pattern and so seem to be practically identical. They first try to scare potential victims with statements like “I installed a trojan virus in operating systems of all devices of yours, which you use to open email”, “My software enables me with access to all controllers inside devices of yours, like microphone, keyboard and video camera”, ” I can effortlessly gain access to all your messengers, social networks accounts, emails, contact list as well as chat history”. In more awkward English, the scammer then proceeds to explain that they were able to infect your device with a trojan that essentially allowed them remote access to your device. This supposedly allowed them to turn on the camera and microphone while you were watching adult videos and make a video of it. The malicious actor claims to have made a dual video of you watching adult content on one side and the pornographic video on the other.

The scammers ask you to transfer $1370 to the provided account. If you don’t, they’ll allegedly send the video to everyone you know and post it online. It goes without saying that these statements are total rubbish, despite the fact that they may seem alarming. There is no video, nor is your computer infected with malware. You can remove the “Start The Conversation With Bad News” email scam from your inbox as soon as you get it.

There are different types of these scams, and the sextortion ones are the most believable of them all. In some of the more ridiculous ones, malicious actors imply that you will be the target of an assassination attempt if payment is not made. Another scam email threatens to detonate a bomb at your place of employment if money is not transferred to them. And during the COVID-19 pandemic, users received emails threatening to infect them and their families with the virus if they did not pay money. The absurdity of these emails really has no bounds. Fortunately, they are rarely successful because users can see through their ridiculousness. However, in certain cases, the sextortion emails are somewhat successful because money has been transferred to the malicious actors’ accounts.

Why did you get a sextortion email in your inbox?

Sextortion emails, like this one, frequently make the allegation that recipients are receiving the emails because a trojan has been installed on their machines and their email accounts have been compromised. That is not actually true. What likely happened is your email address was leaked by some service you use or it’s been part of a data breach. Once an email address has been leaked, it usually ends up in a database along with other leaked email addresses. Malicious actors can buy these databases from hacker forums. You can check on haveibeenpwned whether your email address has been compromised. Unfortunately, if you’ve received one sextortion email, you’ll likely receive more in the future because malicious actors already have your email address.

Scammers will occasionally go one step further to deceive users by including their passwords. When users discover their passwords in such emails, the email’s credibility increases a hundredfold. Users wonder how else the sender would have the password if not through hacking. In actuality, scammers can get the passwords from hacker forums in the same manner they get the email addresses. Users’ passwords may occasionally be exposed during a hack if they are not adequately protected. Therefore, it would be simple for scammers to include your password in a sextortion email. If you still use the password that was included in a sextortion email, you need to change it right away. Remember that every account, no matter how insignificant, needs to have a unique password. Additionally, you want to use a mixture of uppercase and lowercase letters, numbers, and symbols in your passwords. It may also be a good idea to use a password manager.